The Million Second Quiz app has ranked as the number one free app on i-Phone and i-Pad for several days following the launch of the series on NBC.

Nearly 2 million people have downloaded the app and more than 25 million games have been played on it. The series launched on NBC on September 9th attracting 6.5 million viewers and a rating of 1.7 in the 18-49 demo, which means it had the second largest audience for a debuting series on US broadcast television this summer after CBS's Under the Dome. 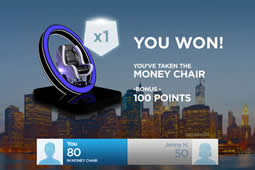