AMC will begin airing The Pitch, a reality series about the advertising world in April. Produced by Studio Lambert for the network that is the home of Mad Men, The Pitch is an eight-episode docu-style show that follows execs at ad agencies as they prepare to pitch on new business.

A sneak preview will air on Sunday, April 8 at 11 p.m. EST after Mad Men and The Killing, before launching on Monday nights on April 30. 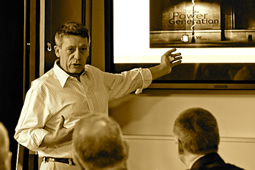