A&E has given a seven-episode order to Be the Boss, a reality series born of the good fortune bestowed on an employee featured in a 2010 episode of CBS' Undercover Boss.

Be the Boss, from Undercover Boss producers Studio Lambert, will revolve around a competition between two employees of a franchise-based company. The employees think they're vying for a promotion, but in fact the winner will be handed the keys to a franchise or new branch of their own. 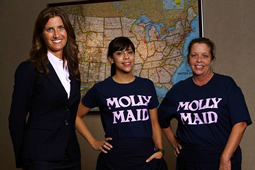